The Texarkana Baptist Children's Home (Orphanage) was formally organized in 1907. The Arkansas Missionary Baptist Association of Churches elected the original trustees to organize a corporation for the purpose of "Erecting and maintaining a home to care for orphan, dependent, and neglected children; to provide for them a suitable refuge, to see after their needs for food, shelter, clothes; to educate them and to provide training that will lead them to Christ and everlasting life."

The original trustees were W. R. Cross, Magnolia; C. R. Powell, Little Rock; J. W. Simms, De Queen; W. R. Story, Hope and T. H. Carter of Stamps. The charter was filed in Miller County, Arkansas on January 6, 1908. It has been in continuous operation since its founding. The Children's Home is owned and operated by the churches composing the State Association of Missionary Baptist Churches of Arkansas.

The first structure of the Home was a three-story building in downtown Texarkana. It burned down, and the Home moved to another location further east. As the city grew in that direction, the Home relocated on its present property in 1954. Campus restructuring and additional buildings in 2000 resulted in its present modern state. 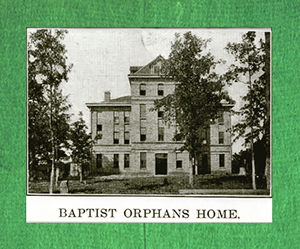